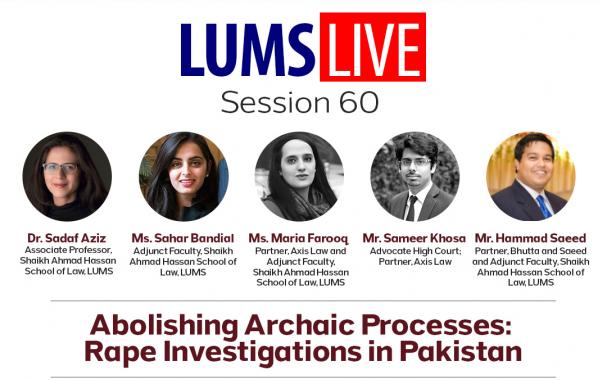 Saida Waheed Gender Initiative in collaboration with Shaikh Ahmad Hassan School of Law at LUMS and LUMS Office of Advancement organized the sixtieth session of LUMS Live “Abolishing Archaic Processes: Rape Investigations in Pakistan” about the recent ban on the virginity test for rape victims.

The virginity test known as the ‘Two-Finger Test’ has haunted rape victims for years in Pakistan. The invasive virginity tests practice has been in force in the South Asian region since the colonial era and has been documented in at least 20 countries worldwide, according to the UN and WHO.

Following two petitions filed in Lahore in March and June 2020 by a group of women's rights activists, academics, journalists, advocates, and a member of the National Assembly, seeking to ban such tests for rape survivors, the Lahore High Court recently passed a landmark decision to outlaw so-called “virginity tests" in rape examinations. Truly unscientific, intrusive, and demeaning, the abolishment of this practice brings in a new era for women’s rights in the country.

Mr. Sameer Khosa
An Advocate of the High Courts of Pakistan since 2008, Mr. Khosa has over 12 years of dispute resolution experience, which has involved constitutional and commercial litigation before the High Courts and he has represented both the private and public sector entities in a wide variety of such cases. He holds an LL.M. from Columbia Law School and an LL.B. (Hons) from University College London. He was called to the Bar at the Honourable Society of Lincoln's Inn in 2008 and admitted to practice as an Attorney-at-Law in the state of New York in 2013. Mr. Khosa is currently in practice as a Partner at Axis Law Chambers. He has worked with concerned citizens to bring impact litigation on key human rights issues such as challenging the archaic “Two Finger Test” performed on rape victims by state functionaries.

Ms. Maria Farooq
Ms. Farooq is a Partner at Axis Law Chambers, a full service law firm specializing in commercial dispute resolution (litigation and domestic / international arbitration) as well as non-contentious project finance, transactional and corporate advisory work. Ms. Farooq is an accomplished international commercial arbitration lawyer with command over the institutional rules of ICC and LCIA. As far as non-contentious work is concerned, she routinely leads teams advising multinational corporations, international financial institutions, and global telecommunications operators. She is an Advocate of the High Courts of Pakistan and was co-counsel in the one of the petitions filed before the Lahore High Court that successfully challenged the practice of virginity testing in cases of sexual assault / rape. Ms. Farooq holds an LL.M from the London School of Economics and Political Science and a B.A-LL.B from LUMS. She is also an adjunct faculty member at the Shaikh Ahmad Hassan School of Law at LUMS where she teaches introductory level courses on the Pakistani Legal System and Legal Reasoning as well as higher-level courses on Contract Law and Legal Writing and Research Methods.

Dr. Sadaf Aziz
One of the Shaikh Ahmad Hassan School of Law’s founding faculty members, Dr. Aziz has taught in the areas of Jurisprudence and Labour Law. Her research focuses on issues such as the interplay between Islamic and secular legality, the political impact of rule of law narratives and is broadly situated within the field of law and society.  She has authored the book, The Pakistani Constitution; A Contextual Analysis (Hart Publishers). Dr. Aziz received her doctorate from the University of Melbourne. She has held visiting fellowships at the universities of Cambridge, Michigan, Oxford and NYU.

Ms. Sahar Bandial
An Advocate of the High Courts, Ms. Bandial completed the Tripos in Law from the University of Cambridge in 2010 and a B.A (Hons.) in Political Science from Wellesley College in 2008. She is currently working at Hamid Law Associates and litigates in the areas of constitutional, civil, banking, labour and family law before the Civil Court and the High Court. She has a keen interest in gender and law, and legislative drafting. She co-authored the Anti-Rape Bill, which was passed into law as the Criminal Law (Amendment) (Offences Relating to Rape) Act in 2016, and the Punjab Maternity Benefits (Amendment) Bill, introduced before the Punjab Assembly in 2019. She was one of the counsels in the petitions filed before the Lahore High Court challenging the two finger test.

Mr. Hammad Saeed
Mr. Saeed is a criminal defense lawyer with over a decade of experience before the trial and High courts of Pakistan. He has been part of the defense team in several high profile cases, including the Gen(r) Pervaiz Musharraf treason appeal, the Benazir Bhutto assassination case and the Ashiyana case. At LUMS, he teaches the Code of Criminal Procedure, and supervises the Legal Aid Clinic, working with students offering representation to indigent accused in capital crimes. He has worked on a number of Criminal Justice Reform projects, particularly with the Probation, Parole and Prosecution Departments in KP and Punjab. His work also involved working with the Senate of Pakistan to improve legislative drafting services to members.