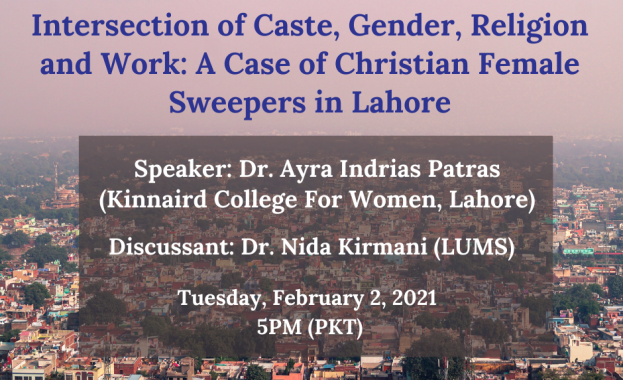 The historical baggage of caste-based prejudices coupled with socio-religious inequalities have been quite detrimental for low hierarchy laborers/sweepers in janitorial occupation, which is overwhelmingly dominated by Christians in Lahore. Drawing insights from the theory of intersectionality, Dr. Ayra Indrias discusses the findings of her doctoral thesis with Dr. Nida Kirmani, describing multiple social divisions based on religion, caste, class, skin-colour, and gender-bias shaping peoples’ subjective realities and synergies that in turn lead to disadvantages, discrimination, and social alienation.

Dr. Ayra Indrias Patras has been teaching women studies at Kinnaird College for Women Lahore and is engaged in women welfare projects at Women's Desk of the Lahore Diocese Church of Pakistan. Her work on issues pertaining to religious minorities and women has been occasionally published in national dailies and academic journals.

Dr. Nida Kirmani is Associate Professor of Sociology in the Mushtaq Ahmad Gurmani School of Humanities and Social Sciences at the Lahore University of Management Sciences. Nida has published widely on issues related to gender, Islam, women’s movements, development and urban studies in India and Pakistan. She completed her PhD in 2007 from the University of Manchester in Sociology. Her book, Questioning ‘the Muslim Woman’: Identity and Insecurity in an Urban Indian Locality, was published in 2013 by Routledge. Her current research focuses on urban violence, gender and insecurity in the area of Lyari in Karachi.