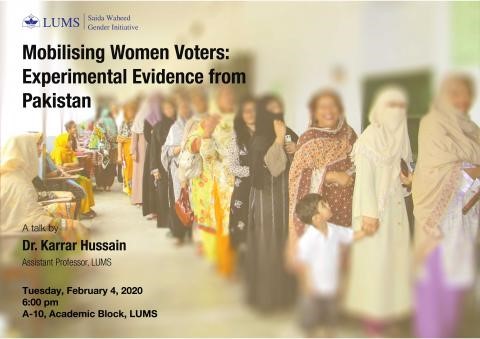 The talk titled, 'Mobilizing Women Voters: Experimental Evidence from Pakistan’ explored one reason for the gap: the lack of mobilization of women by political leaders. Dr. Karrar and his research team evaluate a randomized door-to-door campaign by an incumbent politician in Pakistan, a campaign that was conducted by women and focused on women. The women are informed of the public service delivery work undertaken by the incumbent on policy preferences that are highly ranked by women. The randomization took place at the polling station level, allowing us to use official electoral data on gender-disaggregated turnout and vote shares. He further shared findings for his research, which suggests that in a highly competitive campaign the winning margin is 0.08% of the total polled votes and women's turnout in the election was unaffected. However, the vote share of the campaigning incumbent increased by 5 percentage points. Furthermore, they find suggestive evidence that this response interacts with low prior information: the effect is driven by rural areas and areas where people are poorer and have less information about the incumbent's performance.